Anyone with over 100 reputation can flag problematic comments and posts.

When embedding an iframe youtube video, there are usually a few things we can choose. If the controls should be visible.... and if there should be video suggestions shown after the video finishes playing.

Here's why you should consider banishing this (...?rel=0 option for iframe):

What do you think?

You should closely control the proposed YouTube videos after the broadcast.

Post: Answer to "How do we pubish guides so that they are...

How do we pubish guides so that they are visible to all?

We would like people to be able to come to our Douzki and look at some guides we've posted. In the guide document, it says that the guide is published and visible in searches. However, they don't show up on the main page, and are listed within guide categories as unfinished documents. Are we missing a step? Thank you!

In the introduction tab of your guide you will need to remove the In Progress flag. This flag prevents your guide from being displayed until you remove it. 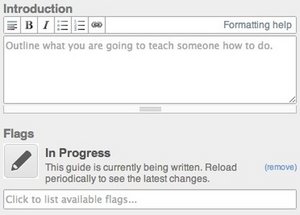 Your guides should be publicly viewable on the category page that you've linked them to as soon as you've switched the viewing permissions from "My Team" to "Everyone". 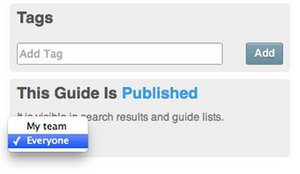 Be sure to check that you're guide is placed under the correct category page. 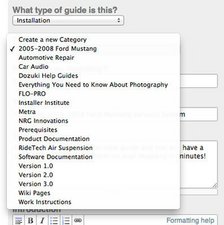 Post: Answer to "How can I insert the triangle with! inside?"

How can I insert the triangle with! inside?

Used to indicate that special attention is needed?

You will need to click on the bullet that you want to add a caution marker to. You will then be able to choose from multiple colored bullets and a note, caution, or reminder icon.

Take a look at our help documentation for more tips.

Document all the API parameters

Can the API documentation be updated with all parameters?

Only through following the 'example API call' link did I stumble upon the 'pretty' (prettyprint) parameter.

Are there any other general parameters?

We've been working hard on an update to the API, 1.0. It should be out soon (I think in a few weeks). It's basically done, but we haven't posted it yet because we've been running it past a few developers to get feedback.

Here's the documentation for the 1.0 API. It's a bit better documented than 0.1 and adds support for video, which is coming down the pike.

We added ?pretty as a convenience for ourselves—all it does is add whitespace to the JSON response so it's easier to read. (No program calling the API would want to use it.) But I reckon you're right, it can be mighty convenient and we should mention it in the docs. I'll do that.

On a site I'm interfacing with, some of the content is in Items (e.g. http://site.com/Item/Item_Name_Here ). However, I'm not seeing any method to get at the list of Items or details about an Item through the API.

Normally I might expect references to them to be found in a Device or Guide's Parts or Tools list, but admittedly I'm not sure if the site's author has set the Device page up correctly.

Even so, however, if an Item exists but there is no other API-accessible data linking to it, I would like a way to query the list of Items and retrieve details about them through a direct API call.

We don't yet have an API endpoint for items, but we should. What information would you like to know about them?

If you describe your usage scenario it will make it easier for us to design something that works for you.

The Dozuki platform was upgraded on July 12th, 2012, what changes were rolled out in this new version?

Why use DOZUKI Image Markup

How about a DOZUKI plugin for SNAGIT...that would be awesome and is easy to do with SNAGIT I believe.

The main benefit you get from using our online image markup tools is that the markup can be edited again later whenever you want, and as many times as you want, without ever leaving Dozuki or affecting the quality of the original image. We layer our Image Markup on top of your pictures, leaving the original image in tact.

While Snagit does look like a pretty useful desktop screen capturing tool, it's unlikely that we'll be developing a Dozuki plugin for it in the near future, as that would take quite some time to develop.

We have plans to improve Dozuki's image markup by adding another highly requested type of markup for you to use: a colored arrow. Using arrows on your images will make it easier for you to correctly convey motion in your pictures, without needing to use multiple pictures one after another. Do arrows in markup seem like they would a useful tool for you to use?

Post: Answer to "Can guides be under multiple categories?"

Can guides be under multiple categories?

Currently, when creating a guide there is a drop-down menu to choose one category the guide should be under. Is there a way to choose multiple categories for a specific guide?

Right now, there's no way to associate a guide with more than one category. We've heard the request for that ability once or twice in the past, and we're working on possible solutions.

There are, however, two different ways that you are able to show guides about a certain category on a different category page:

Both of the above are demonstrated here. The wiki syntax that creates that page is shown here.

Post: Answer to "Why do my searches keep coming up empty?"

Why do my searches keep coming up empty?

What I see when searching for "Release", which I know there should be more than 0.

A server error with our search service brought search down for all sites for about an hour tonight. The problem has been resolved. Your search works now.

Thanks for the heads-up! I'm sorry for the inconvenience.

Post: Answer to "Looking for a foot shear to cut rubber."

Looking for a foot shear to cut rubber.

We mold rubber stamps and would like to get a foot shear to trim the flash (excess rubber) from the sheet of molded rubber. do you have such?

Sorry Steve, we do not sell foot shears. You may want to try Grizzly.com. Thanks for using Answers though!